In August 2018 news surfaced about the killing in the Central African Republic of three Russian journalists who were carrying an investigation into the activities of the secretive paramilitary Wagner group. The Washington Post described the group at the time as a “shadowy Russian mercenary organization linked to Russian President Vladimir Putin’s close circle”[1]. Three years later, last week, the same Group, who was also spotted in Northern Syria, is said to be finalising a high-profile contract with the government of Mali. The contract between Mali and Russia’s Wagner Group stipulates for 1,000 Russian mercenaries to be deployed. Paris is trying to prevent it from being finalised[2]. Can it be a coincidence that both Syria and the Sahel region are equally unstable, victims of regular Islamist attacks and represent a logical cost-efficient passage route for much needed future gas into the European markets?

What is Russia still doing in Syria and why does Putin sponsor para-military groups in sub-Saharan Africa? 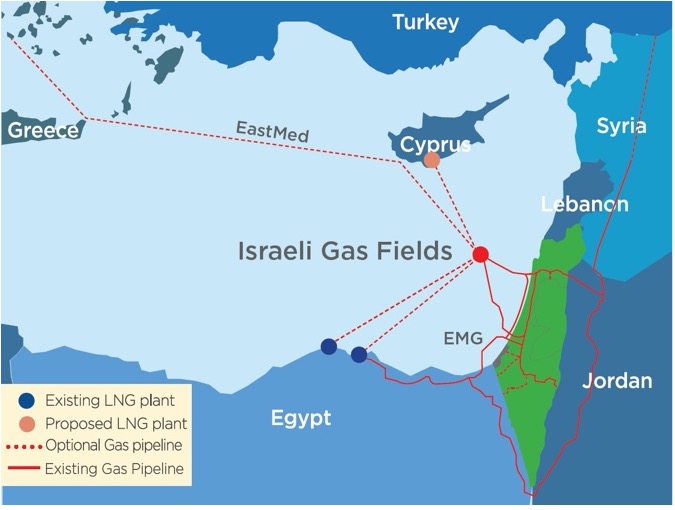 This month has been news rich and illustrative of the Great Game unfolding with Russia’s masterful hand in maintaining its control over Europe’s access to natural gas, while at the same time appearing merely as a sideliner observer of events as they unfold. Asked during an online interview with the Council for International Relations on Sept 8th about the prospects of the East Mediterranean gas pipeline, US Ambassador to Greece Geoffrey Pyatt answered: “The East Med Pipeline, if it were to be constructed, would be the deepest and most expensive pipeline project ever in the history of the world.” This comment came few days after US Ambassador to Lebanon Dorothy Shea was cited affirming that ongoing negotiations with the World Bank will provide the funding required to purchase “Egyptian gas”, develop the electric transport lines, and fix the Arab Gas Pipeline (“AGP”). Three days later, on the 20th anniversary of 9/11, Amos Hochstein, the State Department’s senior adviser for energy security, declared that he had delivered reassurances to Ukraine and Poland on mitigating any threat posed by Russia’s Nord Stream 2 gas pipeline (by passing both countries), but that the project was now a “reality”. A day earlier Gazprom had announced the completion of the pipeline.

By 2035, the EU will need to import about 120 billion cubic meters (bcm) more gas per year according to the Nord Stream 2 website. Production outlooks of major gas producers such as Netherlands and UK, as well as Norway, are falling. At the same time, demand for gas is expected to continue, owing to its lower carbon qualities. The aggregated design capacity of Nord Stream and Nord Stream 2 is 110bcm of gas per year. Nord Stream 2 will have the capacity to meet about one third of the EU’s import requirement. This begs the question: where will the rest come from? Nevertheless, wherever one looks, one finds Russia either as supplier (Gazprom -Northern Europe) or as a gatekeeper (through military presence and mercenaries in Africa, Syria).

Understanding the above is crucial for anyone who might be thinking that the shift in the US position vis a vis Syria and their announced decision to provide a waiver to the Caesar sanctions,

is merely driven by the energy concerns over Lebanon’s economic collapse and its application of 0.6 BCM per annum supplied through the AGP. That shift is rather driven both by the need to ensure Europe has sufficient and diversified gas supply to meet its growing and shifting demand in the context of the North Sea’s production decline and the need to ensure that Israel gets access to European markets in the years to come. In that context, Ambassador Pyatt’s comment on the challenges for the East Mediterranean Pipelineproject tells a story of economic realism: considering price uncertainty and the anticipated costs of the offshore route, Syria is the next unavoidable Ukraine, providing safe passage not to Russian but to Israeli gas, albeit with a Russian -capacity limiting- gateway and security guardianship. This game in play required first a regional energy infrastructure and security pact, whose main promoters are Egypt and Israel, and the blessing by the US, the GCC, together with the opportunism of Turkey.

Egypt’s 10BCM/Y AGP in addition to its two LNG export facilities in Idku and Demietta have a combined maximum capacity of 27 BCM/Y (assuming Egypt will be self-sufficient for its own domestic needs). Dropping an estimated need of 2-3 BCM/Y in Jordan, Lebanon, and Syria, this would leave up to 25 BCM/Y available capacity to connect to Europe via LNG and the onshore Turkey Interconnector. Current estimates anticipate peak plateau production from Israel to reach 30 BCM/Y by 2030. Depending on Israel’s domestic consumption, this should make the case for the Syrian route ensuring the monetisation of future production from Leviathan and Karish.

Another source of supply for Europe has traditionally been the Algeria’s subsea pipelines network. Algeria currently exports about 40 BCM/Y of natural gas. Nonetheless, the 120 Bcm/y additional import requirements for Europe mentioned above mean that additions those exports are needed.

One source of supply that could connect to the Algerian gas network is Nigerian gas currently either stranded or being flared in the Niger delta if not exported into the West African Gas Pipeline. There are currently two competing projects envisaged. The equivalent to the costly East Mediterranean pipeline here is the Nigeria-Morocco offshore route along the West African continent while the Trans Saharan pipeline project offers a Ukraine like role here to be played by the Sahel countries (Niger, Mali)[3] benefiting from the existent gas infrastructure.

What Putin seems to be pursuing is to accelerate the delivery of Nord Stream 2 gas from Russian fields, now achieved, while positioning either military forces or friendly mercenaries ahead of the game, as the gate keeper for East Mediterranean and Nigerian gas exports. The geopolitical implications of recent developments in the Levant, are significant. On the one hand, it looks like gas (enhanced by the Abraham Accords influence) might be the most effective yet imminent peace accelerator ever achieved in the history of the region. On the other hand, it also implies that Iranian gas will need to find alternative routes to future markets, and that Iranian militant’s presence in Syria may be short-lived as the dialog between Damascus and Moscow intensifies[4]. That however also implies that Iran will probably cling even harder over its control of Lebanon, a country more and more seen as a satellite state, and a launchpad for Iranian missiles. A malfunctioning launchpad, a rusted pickup truck driven by disillusioned militants whose time is spent looking after families seen queuing for necessities. Not the kind of financial package Wagner fighters must be earning in Mali.