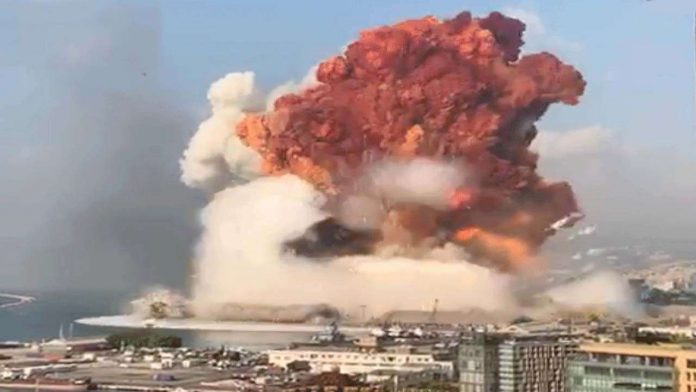 The Beirut Port blast of August 4, 2020 was one of the largest explosions in a non-war zone since World War II. Whether it had a Nuclear-like effect, or a Nitrate substance, or some other technical aspect or dimension is of little importance. What is, remains the fact that hundreds were killed, thousands were maimed, and part of an entire city was obliterated.

Still, the ruling kleptocracy of Lebanon, protected by the Iranian militia better known as Hezbollah, has derailed, yet again, the ongoing judicial investigation into this criminal act, by threatening and then executing on its threat, of dismissing the second judge in charge of the file.

The Lebanese are left on their own. They have no support, no succor, and no hope of finding the truth about that deadly blast let alone, brining anyone responsible for it, to justice. The deads are dead and the living too, or so it seems.

We hear a lot about the civil society in Lebanon. We have no precise definition for such terminology. We know of the military society, and the political society. So, what would then be this civil society? Those who are not officially in politics but would like to join its ranks soon? Those who are apolitical but would also want to bring to the fore issues of grave importance to society such as health, education, environment, power, governance, proper policing, and human rights? What else is left for politicians to do, empty the coffers of the State?

So, this civil society, and we are told that some of its groups are well-funded and well-supported locally and internationally, did not find in the Beirut Port blast a sufficient cause for alarm. Would more than 200 dead and few thousands maimed be less important than garbage collection, power supplies, bankers’ greed and the environmental impact of climate change? Why is this civil society so much weaponized about public sector corruption and not enough about the State’s criminal behavior beyond the realm of the economy? The State knows or condones those who have committed the Beirut Port explosion and still the civil society is seeking to tackle the level of deceit in banks, in ministries, in public sector agencies including the Central Bank, but not in everyday life. Are they for real?

Why aren’t the tenors of this so-called civil society haranguing the official State actors and the unofficial ones (Hezbollah singularly) about their shared responsibility in the Beirut Port blast? Are they seeking to manage their feelings or are they clamoring for positions in the upcoming elections or in any post-election government? These are legitimate questions that remain unanswered.

We are yet to find one plausible or improbable explanation for such behavior. All that excitement and zeal to recover lost deposits, and to redress a policy of graft and corruption, faced with utter silence when it comes to pointing the fingers to murderers and killers, to supporting an independent judiciary, and to calling for an international investigation of this human tragedy which saw the light (a near-nuclear one we are told) on August 4, 2020.

Whether Israel bombed the Port and whether Hezbollah stocked the Nitrate in the silos are matters for the military and political societies to deal with. However, raising the standard of protecting civilians should be the primary role of any civil society. Fighting to get the truth out, calling on every press corps to investigate and publish data, appealing to international courts of criminal justice, seeking out UN panels and committees on human rights, lobbying, protesting, and remaining restless until the veracity of the facts is told should be the sole mission of the so-called civil society, no?

If that’s not its role, why is it there, and if it is why is it inactive.

No wonder people in the upcoming elections will vote again for the corrupt and inept members of the military and political societies, because at minimum, they know their nefarious roles and they fulfill them.