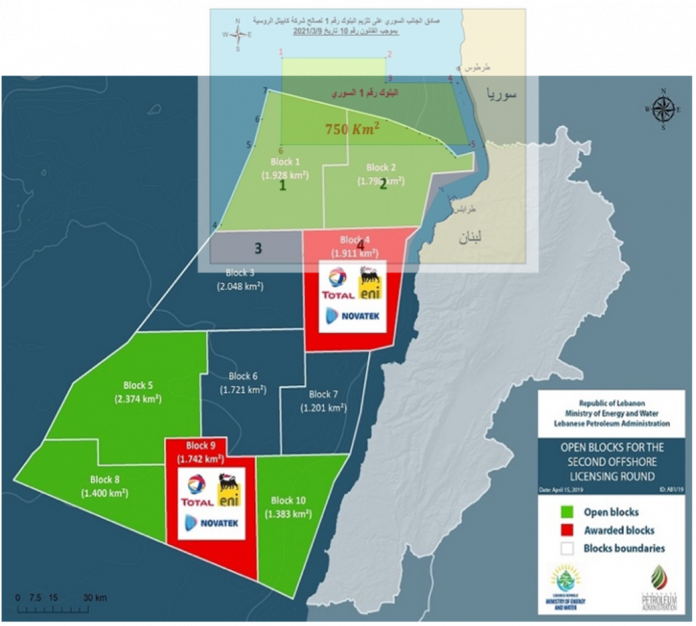 The latest tragicomic even unfolding near Lebanese east Mediterranean shores was the recent announcement of Syria’s award of its deep water “Block1” to a little-known Russian exploration company with four employees and based in Chelyabinsk, Capital Neft Limited[1]. The announcement took the Lebanese by surprise as it practically meant that 20% of the total area in Lebanese Blocks 1 and 2[2] have been infringed on by the Syrian award. Not a single word to complain came out from the Lebanese authorities (Foreign Ministry, Council of Ministers, Lebanese Petroleum Administration).

Only social media reacted to this information, and rightfully so. It later appeared that in June 2019, during the early negotiations between Capital Neft and the Syrian oil ministry, a request may have actually been sent to the then Minister of Foreign Affairs in Lebanon on June 27th2019 (as reported) requesting them to demarcate the northern maritime borders. One can only draw a sad parallel between this resounding silence and the drum beat outrage by the Lebanese Authorities, now claiming southern maritime borders obscenely far dawn south, in relation to Karish, the Israeli field currently under development by Energeen[3] which Lebanese lately decided to claim partially their right in a grossly unprepared and belated move citing a tiny rock outcrop to justify their claim[4].

Territorial (and maritime) sovereignty is what distinguishes a commonwealth from a no man’s land. Lebanon’s offshore blocks in deep waters are becoming mermaids of joy for political traders on the slavery market. They are used to promise a windfall from oil and gas resources yet to be discovered and abused to make room for the next bully freshly accosted in the Russian new Kaliningrad like enclave on the eastern Mediterranean shores.

At a time when Lebanon is being punished and rationed in its supply of dollar priced oxygen by a producer who relocated unchecked from Beirut to Syria few years ago[5], it’s about time to realise that the Vichy style authorities in Beirut may be planning other mermaids’ trades on the back of an ever more impoverished and exposed population.