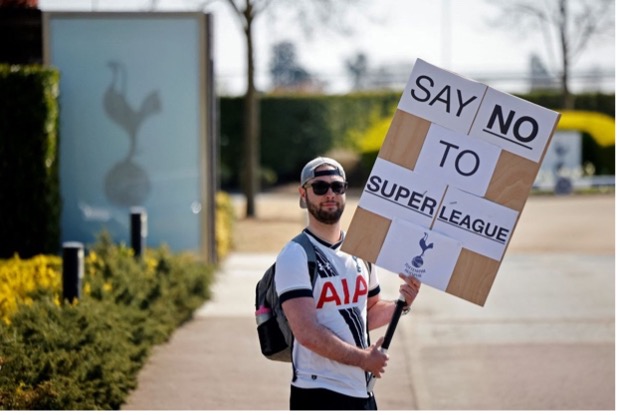 The identity of European football was thrusted under the spotlight. To be prodded by ethical experts, to be analyzed by gatekeepers of morality and has raised all sorts of questions but mainly, and this is my favorite one, “what’s going on?” For the non-sports enthusiast, the justified social media outrage demanded an explanation: “what is the Super League, what do they want and why is everyone super angry?” Thankfully the mutiny to take over European football by the 12 breakaway clubs failed and barely lasted 48 hours. But in the aftermath of the Super League’s calamitous buffoonery, we learnt a few things. We learnt from their imbecile behavior that after the colossal wreckage there was a football awakening among the football fans, UEFA and from some of the clubs who tried to stage a coup.

Some dared to echo that there’s only romance in baseball. But once we brushed aside the piles of greed and gluttony, we find there’s plenty of love and passion in football. Through the sea of supporters protesting with their banners and chants, it’s evident that they knew, right from the moment the announcement reached them, that they were being sold out. Their traditions were being ransomed when they never agreed to stage the negotiations. It was then that the fans pointed their fingers and wagged with venomous fury their outrage at their clubs’ greed. It was an awakening in droves. For all the years of placating and condescension by the clubs, telling their fans that they mattered most, that the club would be nothing without its fans. The supporters knew that talk was all poppycock and jibber-jabber. The clubs were fake. And the anger from the lies and the phoniness created a collective unity that, most likely, broke the door which caused the collapse. The fans were well organized, clever, funny and united. Their powerful display opened our eyes as to how mighty and influential they are to the footballing industry.

But let’s not forget the first victims from this fiasco, UEFA. Can we really convince ourselves to think that the rulers of European football should be pitied? No? Have you ever suffered a mutiny? It must’ve been quite a horrific ordeal, a truly upsetting incident. I mean here they are trying to do good by these clubs by offering them a platform to compete against one another for the right to someday place their hardworking hands on the trophy with the giant ears and, of course, to get their greedy hands on that participation paycheck. Surely, you’d expect UEFA to be somewhat compensated for their organizational skills. The question becomes how much of the pie are they taking and what are they using it for. Well, I suppose in the event of a mutiny. UEFA spent a ton on public relations, rallying the troops and by troops, I mean the broadcasters, the sponsors and the football associations. Call it what you will their tactics worked. And what we learnt is that UEFA was prepared for such an assault both financially and in terms of PR. They let us know that the kings of Europe are healthy, powerful and impervious to flimsy coup attempts. It would take more than 12 hungry clubs to steal their pie.

You can’t help but shake your head at those 12 woeful clubs. Aspirations of money, power and control dreamt on for years upon years only to be evaporated after 48 hours in the most humiliating of circumstances. They crumbled when faced with the pressure. The lack of cohesion was their downfall. I mean it’s as though they’ve never toppled a regime before. The chairmen of the most powerful clubs in England, Italy, Spain were dwarfs in front of UEFA. No political clout, no public relations power, they couldn’t secure the broadcasters and now these powerful men are either issuing apologies or resigning from football. These powerful men have accepted defeat and quitting the sport…for now.

Because we’ve heard this story before. The clubs will learn from their mistakes and will be back to try and topple the top dog again. But what have we learnt? The clubs want the freedom to take as much money from the pie as they can. They want freedom from UEFA. And, ironically, the fans want theirs from the club. They want their club to be free from the clutches of greed. It’s fascinating how before the eruption of this footballing fury we were all numb to the sport. There was a dullness from the routine, a mundaneness in the outcome of matches. Then the Super League came and woke us up. We saw fans for who they really are, our eyes opened to what clubs truly want and, unfortunately, we’re now stuck with UEFA’s greed and lack of creativity. We’ve sadly come to terms with the realization that it’s better to be with the devil you know than the devil you don’t.