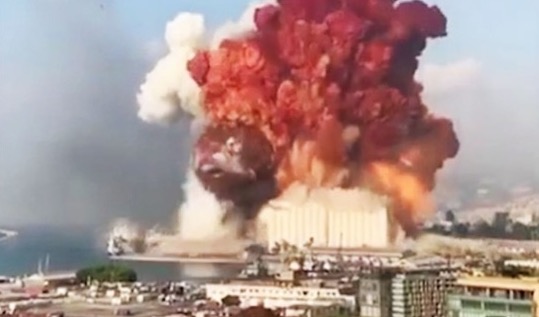 Today is Remembrance Day of the Beirut Port Blast which occurred tragically at 6:08.18 pm on August 4th, 2020, and killed 232 people, injured 7000 civilians, caused material damage to a further 300,000, whilst wiping out more than 15% of Beirut’s residential district.

The blast physically shook the whole country. It was felt in Turkey, Syria, Palestine, and Israel, as well as parts of Europe, and was heard in Cyprus, more than 240 km (150 mi) away. It was detected by the United States Geological Survey as a seismic event of magnitude 3.3, and is considered one of the most powerful accidental artificial non-nuclear explosions in history.

Official records indicate that roughly 2.7 kilotons of explosive material were stored at one of Beirut harbor’s warehouses where the explosion occurred. The people who had the capacity to store such number of explosives are no usual outfit, as in a normal logistics company or some commercial contractor working in the port zone. The nature of the explosives is of the sort used in making dirty -or dumb- bombs which have frequently been used in the Syrian war. A war prosecuted by Iran with Russian assistance. As far as we know, Beirut has no Russians roaming around its harbor, but as far as Iranians are concerned, the country has plenty of their proxies, henchmen, and a growing chorus of macabre fans. Also, those who want to prevent the Iranians-Hezbollah from getting their hands on such incendiary devices, are not a legion. They do not include the U.S. which, at the time, had halted its nuclear program negotiations with Iran, or France which covered-up the causes of the blast for geopolitical and economic factors, or the Lebanese government which, was and remains comatose about the evidence, the perpetrators, and the reasons behind the blast. Only Israel has the physical means, the intelligence-gathering capacity, and the motive to do so.

So, most probably Iran, and precisely Hezbollah, stored the explosives while most assuredly the Israelis blasted the hell out of the entrepot holding them. However, only Lebanese civilians died as a result of this war-between-wars. They died in pain, in horror and mostly, in silence. The world sent them medicine, food, and blankets. The international relief organizations and NGOs did not spare a dime for the reconstruction efforts and for re-setting the pace of a near-normal life for thousands of victims. Ironically, some fellow Lebanese came to take smiley selfies with the blasted silos in the background and bodies still buried under the tons of ashes. Others sent brokers to buy out the destroyed flats for a pittance, and many still tried to scavenge the ruins, and steal furniture, personal belongings and still fuming clothes and linens from the devastated abodes.

The shame of the world has not been its lack of compassion but its unpardonable silence. After an initial condemnation, President Trump walked back his claims that the blast was an attack. President Macron did not even bother speculating about an attack. He busied himself in meeting the wounded before he secluded himself in meetings with the local political elite who is directly responsible -but who remains unaccountable- for the safety of the city and its citizens. Europe and the world at large, wiped the blood of the Beirut Port Blast’ victims with the shrug of realpolitik.

Political leaders around the globe can, at their own peril, ignore the dead, and the sufferers of the Beirut Port Blast but they cannot prevent its recurrence in any of their cities and ports. The lesson drawn by the perpetrators -both those who hoarded the explosives and those who blasted them – is that getting away with murder in plain sight cannot be easier than this.

For the civilized, uncivilized, developed, undeveloped, emerged, and emerging world: “you have been unwillingly colluding in this blast because silence about terror is not a sign of fear but of tacit complicity”. Noam Chomsky had something to say on the subject: “Everyone’s worried about stopping terrorism. Well, there’s really an easy way: Stop participating in it.”

State the truth about the blast and let the dead rest in peace and the wounded recover in solace.