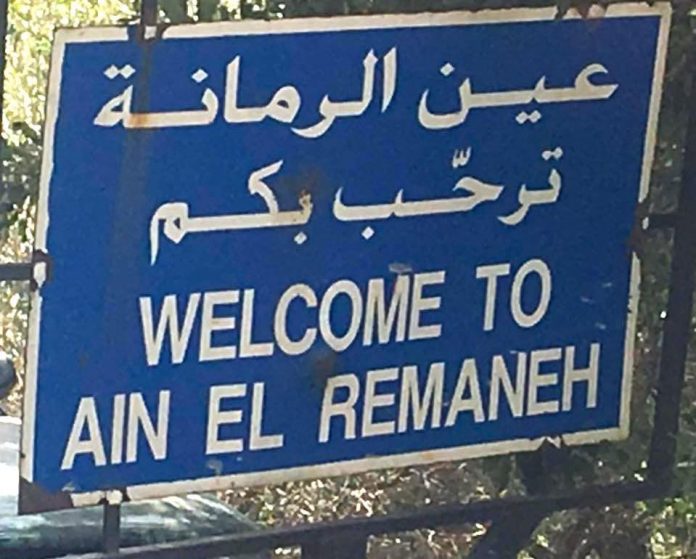 What happened in the streets of Beirut on October 14, right on the demarcation line of the past civil war, was not caused by sectarianism or ideological differences between Shia-Islamist’s militants and Christian-right wingers. What took place was a distractive maneuver led by Hezbollah et al, to deflect attention from the raging battle for Lebanon’s next president.

Hezbollah is Lebanon’s puppet master. First, it subjugated the Sunni establishment (not the Sunni Street) who in turn, kowtowed in toto since 2008. The Sunni barons want to preserve the powers granted to the office of the PM and to the Council of Ministers. These were stripped away from the Maronite presidency since the Taif Accord. Second, it emasculated the Druze leadership at all levels from the erstwhile relevant House of Jumblatt to the lesser House of Arslan. Third, it cajoled, bribed, and conquered both Aoun (with the current prize of presidency) and S. Franjieh (with a future promise of that same prize). All told, the FL remained outsiders even after forging a catastrophic and short-lived alliance with Aoun. They are viewed by the post-Taif nomenclature as vestige of the ancien regime which resisted the State’s cooptation by Syria from 1990 to 2005, and now by Iran. This commandeering of the State’s authority allowed Syria-Iran’s political allies to plunder public revenues and assets, at the expenses of the rest. The FL and their leader remained excluded despite having attempted to become insiders by supporting Aoun’s presidency. This bet failed miserably and then, it totally backfired. The FL hoped to be on the winners’ side (the rivals of yesteryear) only to find themselves excluded from getting a slice of the power cake. So, the FL and its leader are no geniuses in local politics, and that is a well-established fact. However, they remain a force to be reckoned with and, their elimination is still eyed with advantages by the post-Taif nomenclature, all religions confounded.

One thing is certain, the race for the presidential prize is on. Aoun is insisting on anointing his son-in-law as the next president. For that he needs the pre-approval of Hezbollah, who is unwilling to give it prematurely. Hezbollah’s masters in Teheran are witnessing their political demise in Iraq and their military decimation in Syria. They are locked into arduous and uncertain negotiations with the US. Whereas Lebanon is a bird in the hand (or in the cage) that could be traded at any time for a larger prize. Aoun may be impatient, but till the conditions of such grand bargain are clear, Teheran is in no hurry to set that bird free. To add to the excitement, Hezbollah has another horse in that race namely, S. Franjieh, who has fulfilled all required tasks, and is eager to give more.

Berri -the pillar of the post-Taif nomenclature- is refusing to give-in to Aoun’s tantrums. He is dead set on stopping the landgrab conducted by Aoun onto government prerogatives and administrative posts. For Berri, the presidency is a symbolic office, left to the Christian after Syria had crushed their right-wing elements in the mid-1990s. Hence, no leeway or quarter should be given to them except what the ‘others’ (Muslims in general and, Shias in particular) would agree to leave on the table. Berri is the quintessential deep State operative. He has survived all presidents since Amine Gemayel and will not be swayed or intimidated by Aoun (or his son-in-law for that matter). Jumblatt is following Berri’s lead, and the Sunni barons mimic what Jumblatt does, although they claim independence in their decision-making. It seems that saving face in Lebanese politics is more important than having one.

In this context, the belligerent Berri and the overconfident Hezbollah defied Aoun in the Council of Ministers (officially) and in the street (popularly). The purpose was to halt the investigation of the Beirut Port Blast in which Berri’s acolytes and other allies of Hezbollah seem to have been implicated. The real objective was to show Aoun, the limits of his permitted power.

On October14, a provocative street protest degenerated into an angry mob who attacked vehicles, properties, and passers-by in a densely Christian and pro-FL neighborhood. Shots ensued, victims fell, and all hell broke loose. News of an upcoming civil war were disseminated on social media and other forms of platforms. Unsubstantiated accusations were hurled. All fingers of the post-Taif nomenclature pointed towards the FL and its leader, as a convenient collateral damage.

The frenemies will be horse-trading till the presidential elections in 2022, with deep tensions surviving between Aoun and the Hezbollah/Berri camp over how the post-Taif State should be administered, and how would the spoils be allocated. A presidency may be symbolic, but its approval for the divvying up of the loot remains an essential part of the political machine.

However, on October 14, a ricochet bullet hit Hezbollah’s myths of Godly power, Celestial authority, and the Saintly stature of its militia. These fabrications that were supposed to render any local opposition improbable if not impossible, have been dealt a serious blow.