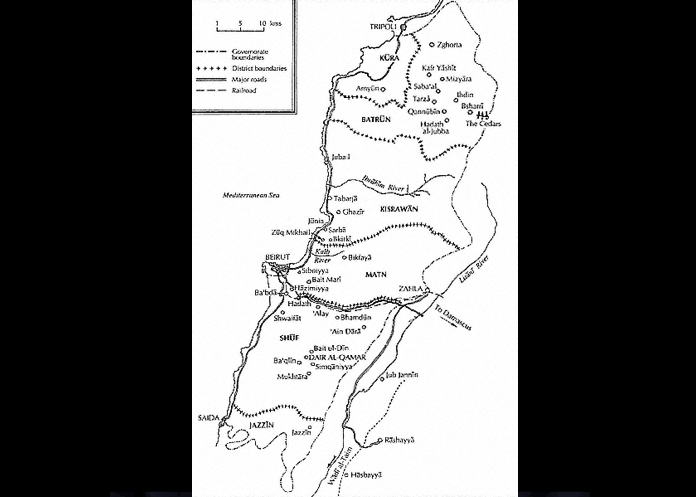 On September 1, 1920, General Henri Gouraud, the newly appointed French governor of Lebanon under the sanctioned mandate of the League of Nations, declared the birth of Greater Lebanon. This declaration was not fully welcomed at the time and still today it is disputed by many elitists and populists, as the unnatural birth process of a nation. Some even contest the country’s boundaries, other the concept, and few contest both, even after 101 years.

Lebanon immediately prior to such date was a mere Ottoman province governed by the Turkish military junta, with Jemal Pasha the ‘Mass Murderer’, at the helm. He was responsible for the execution of many nationalists from all sects, for confiscating grains and livestock and, for provoking the famine that befell the mountain, and caused c. 33% of its population to die and c. 33% to emigrate. He also was notorious for condoning the rapacious practices of greedy wartime merchants from Beirut and Aleppo.

In 1917, the Ottomans were no more so, what were the alternatives?

The romantic Arabists -mainly Sunnis from Sidon and Tripoli and some Orthodox Christians- wanted to join the promised Kingdom of Emir Faysal. A sort of ephemeral Arabistan that lasted few months in Damascus before being rooted out, literally, after one battle. The battle of Maysaloun, following which, Faysal sought refuge with British forces, who as a consolation prize, made him King -in name only- of British governed Iraq. Had the Lebanese followed in the footsteps of the ambitious Faysal, they would have ended up either moving to Iraq, an impossible scenario, or being under French governed Syria, which was already the case of Lebanon. So, not a smart option after all.

The more cautious community leaders of the Druzes and the Shias, did not identify with any of the powers that claimed hegemony over Lebanon after the Ottoman era.  They had little interactions with either the British or French, whether diplomatically or otherwise. They did not form a cohesive camp, or a forceful lobbying group that could formulate a national ambition or simply, a plan. All they wanted was to avoid a return to a Shihab imara under a Christian prince (for the Druzes), or a return to Ottoman-Sunni repression and depredations (for the Shias). Neither group had any grand design about the national framework in which their communities would live, let alone, thrive.

Some Christian community leaders -especially those educated and living in Cairo and Paris- lobbied for a smaller Lebanon, or for Mount Lebanon stricto sensu. They felt no need or desire to incorporate into such entity large Sunni-towns such as Beirut and Tripoli, or ‘far away’ districts such as Wadi Al Taym and Jabal Amil. They were perfectly happy with a Christian-majoritarian Lebanon from Bsharri to Jezzine, with a developed port in Jounieh, for instance, to ensure security and transport. In all fairness, this zone emulated, almost identically, the official geography of Mount Lebanon as a semi-autonomous Ottoman province for half a century, under the Mutassarifiah system (from 1861 to 1915).

Another group led by the more organized Maronite church lobbied with Clemenceau -a staunch anti-clerical statesman- for an enlarged cartography that was originally drafted by General Charles-Marie-Napoleon de Beaufort d’Hautepoul after the 1860 massacres. Beaufort led the expeditionary forces that were dispatched by Napoleon III, with British reluctance and Ottoman reservations, to restore order to Mount Lebanon after Druzes and Christians had committed the most heinous crimes against each other. Beaufort was convinced of Mount Lebanon as the cornerstone of any future nation. He also had close encounters with insurgents in Wadi Al Taym, stage of pogroms perpetrated in Hasbaya and Rashaya in 1860. Many Druzes who partook in the troubles of 1860s, and who were chased by Beaufort’s cavalry, regained the Hawran plateau via the Biqa valley. Hence, the strategic importance of that region became obvious to the French general who incorporated it in his map, as a security buffer for the protection of the mountain. Many detractors of the then top prelate, Patriarch Huwayek, accused him of having insisted on incorporating Wady Al Taym and the Biqa valley to avail the mountain with food security after the famine of 1915. In truth, this rather important factor played very little in the drafting of Greater Lebanon’s boundaries. For even if such region was not incorporated into Greater Lebanon, it would have remained under the Syrian French territorial mandate and, thus access to its produce would not have been denied to Mount Lebanon and its inhabitants.

As for Jabal Amil and the rest of the South, France wanted it under its mandate, not at the insistence of the Maronite church -which did not hold any strong position on the subject – nor at the request of the Shia population, who did not clamor for independence within a unified Lebanon and preferred to be left alone. That was done for other internal security and colonial reasons. In 1920s certain Shia gangs, who defied the authority of their feudal chiefs, were let loose after the defeat of the Ottomans and the interlude period prior to the arrival of the Allied forces. They ran amuck and committed exactions on neighboring populations. In early May 1920 a gang from Bint Jubayl attacked the Christian village of Ayn Ibil, killing fifty inhabitants in cold blood. So, France, and its Christian proponents, used this despicable incident as an excuse to extend French security to Christian residents of the Southern district. However, more importantly and surely more decisively, France wanted to draw a clear line at Ras Al Naqura, a mid-point between Acre and Tyre, that is, between its own mandate over Lebanon and Syria and that of the British in Palestine. Franco-British cooperation in World War I was quickly returning to the Franco-British rivalry of centuries past.

So, the victors of World War I carved out the boundaries of modern-day Lebanon from the limits of the Ottoman Mutassarifiahand added bits and pieces strictly for military and colonial reasons. They did not accommodate the Maronites alone, nor did they act against any specific interest of the non-Christian population. Remember that France had more Muslim population under its mandate in Syria, than Christian subjects in Lebanon. Moreover, France has been accustomed to ruling Muslim territories in North Africa way before World War I.

Present-day politicians in Lebanon project their feuds backwards to denigrate or justify what was essentially a non-Lebanese decision back in 1920, regarding the country’s boundaries. In the final analysis, all communities of Lebanon, those that were ecstatic in 1920 and those who were less so, benefited from Greater Lebanon and the bustling hub that Beirut turned out to be. If anything, nowadays, we hear of plans for dominion over all of Lebanon by some communities, or of partition by others. We rarely hear voices calling for the merger of Lebanon into a greater Syria or Iraq (apart from some relics of the Bath defunct policies) or with Saudi or France for that matter.

The French drew boundaries over a map that considered, religious fears, communal interests, economic factors, and many other arguments, but above all, what prevailed were military concerns and colonial interests that pertained to colonial France and France alone.  Making it a Lebanese, sectarian issue, and worst, turning it presently into a point of contention, pertains to the Lebanese and the Lebanese only.